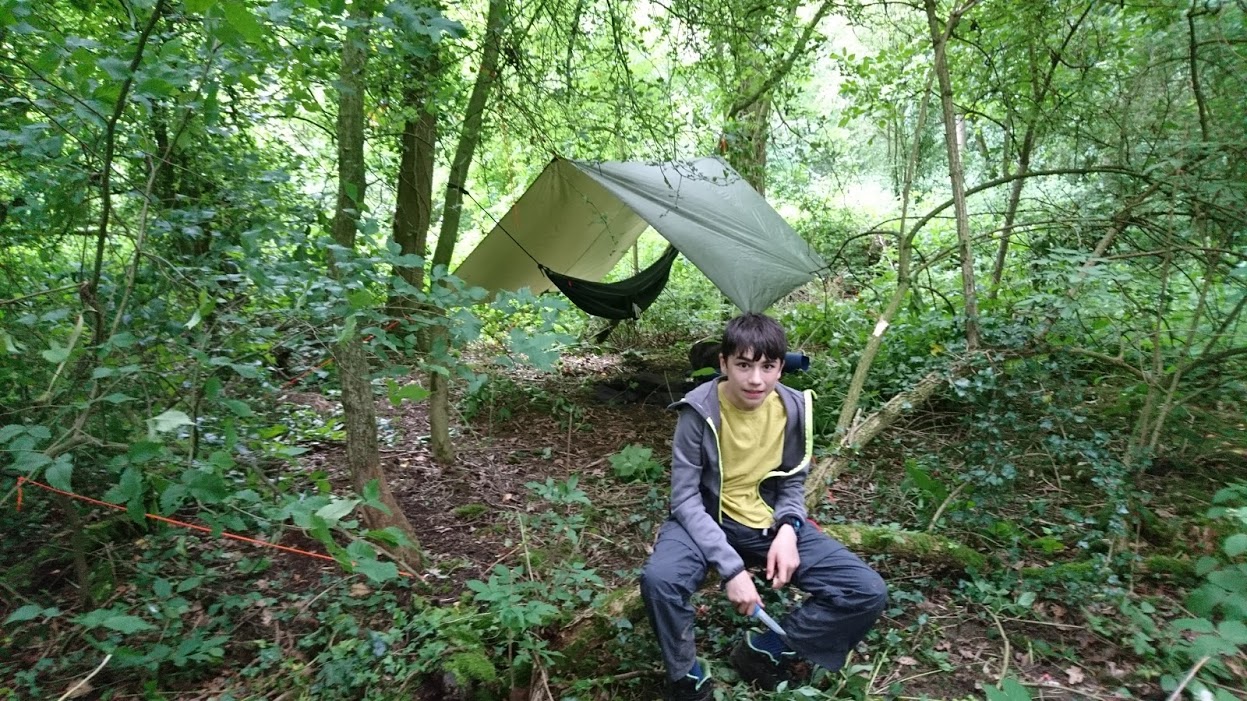 This weekend saw our Scouts hiking into the woods with only what they could carry. Surviving for the weekend before returning to the HQ to be picked up by their parents.

Although we have run many survival weekends before this one, this one has a difference. This time we have ditched the tarps and bivi bags in favour of hammocks. This is the first time our scouts have slept in the trees.

Scouts were divided into 3 groups of 4 at the HQ early saturday morning. We had a quick kit check to ensure nobody had surplus kit and repacked to include their food for the weekend. The only thing scouts didnt carry was their water. We dropped that off close to the site and collected it en-route, carrying it the last 1/4 mile to the woods.

We set off from the HQ to walk the 3miles to the woodland, this took us around an hour. By lunchtime we had found a suitable spot in the woods and had pitched our hammocks, and had our fires in. The woodland we use belongs to Mr Baines of Donative Farm, who kindly allows us to use them every so often for these backwoods/survival camps. They are brilliant, natural woods with loads of fallen timber to use for firewood. We had collected a big pile of firewood within a few minutes and hadn’t walked further than about 50 ft from our fires.

Scouts hadn’t got the luxury of lots of pans, foil or cooking utensils, everything they used had to be carried or made from what they could find. Their tools were just a few folding saws, a couple of axes and a knife each.  Making seats, fish broilers and devising methods of cooking from wood around them.

All cooking was done on open fires, without foil, just using mess tins. Chicken skewers, grilled peppers, mackeral, Sausage, beans and bacon and bannock bread was on the menu, all cooked with only their fires.

We played a wide game in the woods on the evening once it had gone dark. Creeping around the woodland to get to the whistle without being spotted by the guards is a real challenge when you can’t step foot without a twig cracking underfoot.

Sunday morning saw a camp full of Scouts who had a really good nights sleep swinging from the trees in their hammocks. Most of them were surprised just how comfy they are.

Scouts were mostly up by about 6.30am getting their fires in ready to cook their bacon, sausage and beans for breakfast, then bannock bread cooked by twisting the dough onto a stick.

After breakfast we dropped the hammocks and flysheets and broke camp, getting ready to leave, but leaving the fires in to cook a light lunch of fresh mackeral, cooked using homemade broilers.

After lunch we left the site, meeting up with a parent 1/4 mile away who was collecting one scout who had sprained some tendons in his foot before camp, causing him pain to walk. To the delight of the Scouts, she kindly took everyones rucksacks back to the HQ. This made their walk back to the HQ a lot easier. Some scouts had packs as big as they were!

This camp was a real test for some of the younger scouts who attended, they didn’t realise how heavy their packs could get, even with just the bare essentials in them.