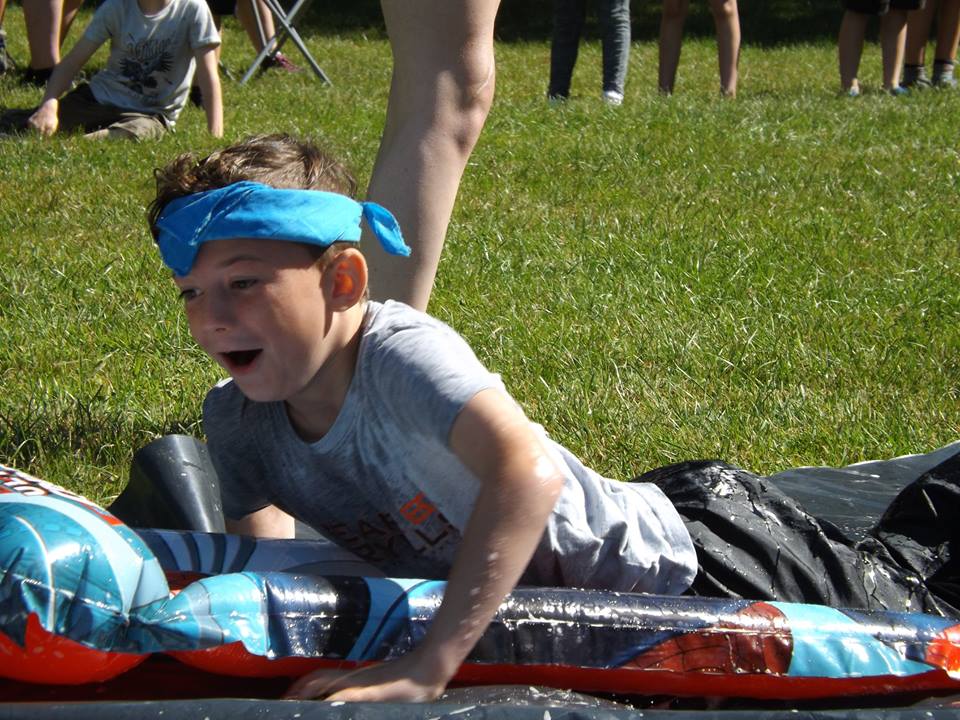 This weekend saw another huge turnout for our annual group summer camp with 100 people in attendance! This year’s theme was ‘Aliens’. For the 5th year running we held it at Ullesthorpe Scout Campsite near Lutterworth in Leicestershire, this time we had the whole site to ourselves.

We had Beavers, Cubs and Scouts, plus Explorer Scouts who are young leaders, a number of adult leaders and a hard working team of cooks.

The weekend kicked off on friday night, pitching tents and everyone settling in before a supper of hotdogs, and a few wide games in the woods.

After breakfast everyone got changed on took of the giant waterside, being blasted with water guns and the hosepipe as they shot down the slippery, soapy slope on airbeds, collecting as many ‘meteorites’ as they could on the way down.

After getting dried off there were giant games of frisby netball. Each section competing to get the most ‘flying saucers into space dock’ as possible. Until the adults and young leaders had an accident with the flying saucer and destroyed it so that it would never fly again!

After lunch and a bit of time to chill out, not that beavers, cubs or scouts know how to do that, there was soft clout archery in the field. Missiles were launched in an attempt to hit the alien planets (hula hoops on the ground).

After a fantastic tea we had a campfire with all sections attending, there were songs which everyone joined in with, and funny skits from the leaders with the help of some scouts. Unfortunately a couple of scouts and a leader got wet during the skits.

After the campfire Cubs and Scouts played a few wide games in the woods before heading off to bed.

Breakfast was later on sunday morning, and while the bacon and sausage was being devoured, the inflatable assault course arrived.  This was set up on the bottom field and when kit had been packed and tents put down; the Beavers, Cubs and Scouts took turns racing each other through the obstacles. Even a couple of leaders went through after being challenged by the Scouts.